Welcome. Edgartown News was born from the simple fact that I have ink and Dektol in my veins and I need to write and photograph more than I need air or food, and from my love for this little town where I grew up and raised my family, the town I have left a few times but can't quite shake for good. Here you will find the wanderings and musings, photographs and commentary; the people, places, and happenings - past and present - of a small island town: my home town.

Well, I didn't quite find the sea of purple and white I had anticipated finding today in my Main Street yard - maybe crocuses are cyclical, or maybe they bloomed last week while I was gone, or maybe something ate them; I'm seeing nibbles here - nonetheless, I was rather delighted to have blown into town on a first-day-of-spring snow-storm.

If you look closely, you'll see a few flakes on the bloom in the photo. It's not that unusual for it to snow at this time of year around here, actually. Today - March 21 - is the same date that I buried my mother, nineteen years ago, and I remember very distinctly that it snowed on that day, too. 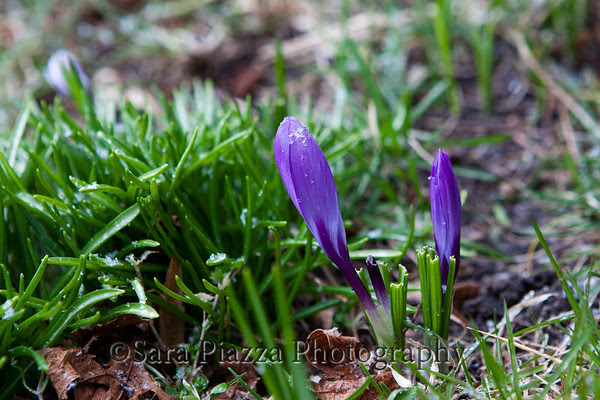 Spring Fever                     By Alison Boylston Piazza
Crocuses are blooming,
Spring is in the air,
So why am I still wearing
My winter underwear?
In mittens, scarf and jacket,
Woolen cap and socks,
What a way to celebrate
The vernal equinox!
Posted by Sara Piazza at 2:36 PM 2 comments:

No pictures this time, though I sure wish I had thought to get a shot of Barry Nevin and Tommy Bassett, whom I met at the post office on Monday afternoon (the three of us were partners in crime back in junior high - don't ask), as well as Doris Ward, Sally Snipes, and Abby Leighton down at the thrift shop on Tuesday.

For some reason, except for a few shots of East Chop Light, which caught my fancy on Monday afternoon, and a little photo/video session with the new grand-babe (now nearly five weeks old) on Tuesday, the camera mostly stayed right in my bag.

But it was a great couple of days in town this week - highlighted by my first baby-sitting session with the new wee-one, which included a walk around town, with Ethan snuggled into the Moby-wrap, just as I used to carry his daddy and uncle and aunt in the carrier of those days, an orange corduroy Snugli; seems like five minutes ago, and a fun "MTV" movie-making session: Sing-along with Grammie, starring Ethan and grammie.

I was reminded by my friend James, who walks past my house often and knows the story of my mother's crocii, when he mentioned last week that he had seen them starting to poke their heads up, that it was time to get out there and clean up the winter debris from the front lawn, which I managed to get done yesterday in my final moments before heading back "off". There's something wonderfully satisfying about that first raking session of the season; getting the large muscle group working after so many months' dormancy, plus seeing and smelling the dirt again, and seeing all those tender, pale green shoots starting to break through. Wonderful. And considering the nature of this chore - providing my mother's sea of purple and white crocii (that started with maybe a dozen bulbs she through intp the ground in the front yard, circa 1990) a clear, clean area in which to burst forth in all their glory, which they do every year the exact week of the anniversary of her death - it's one I hardly mind. In fact, it's a joy.
Posted by Sara Piazza at 8:59 AM 1 comment: