Our own Ann Bassett (Ann has lived in West Tisbury for years, but she will always be ours - your homeys are so proud of you, Ann!) has a wonderful program on MVTV called The Vineyard View on which she interviews islanders from all walks of life and areas of interest. Ann taped a conversation with Yours Truly this past summer, the link to which you will find below.

I greatly admire Ann's work - she has definitely found her niche - do you know, all she did was have the idea, which she took to MVTV, and they taught her how to make the program? - and I am honored that she found me a worthy subject (and it didn't turn out half as dreadful as I thought it would, due in large part to Ann's superb production and editing skills).

In my conversation with Ann I talk (and talk and talk - I've seen her show, doesn't she usually talk more?) about Edgartown in the 1950s, my mother, my religious journey, and end with a song.

To view my interview with Ann Basset, go to: The Vineyard View, which link will take you to MVTV's Video on Demand page. Once the page opens, simply type my name into the search box.
Posted by Sara Piazza at 1:24 PM No comments:

My favorite time of day downtown is between 7-9am. The streets are quiet, but not deserted (deserted, a/k/a January in Edgartown, absolutely does not work for me), and most of the people I run into are folks I know, or haven't seen for a long time, or are strangers with friendly smiles and greetings, or some combination of the above; this time of day being about as close as we'll ever get to that "old Edgartown" feeling and state of mind, I think.

I'm not sure why people are friendlier in the morning than at other times of day, but it's true. I think it's partly due to the unspoken understanding that we're all members of the same club. I also think that folks are just plain happier in the morning, if for no other reason than nothing has gone wrong yet.

I'm not always able to drag myself out in the early morning hours, this time of day being my most productive work time,  but when I do, I'm always glad I made the effort. The fun part is, I never know who or what I will find. Today the light was in my favor - a combination of morning mist with the sun trying to burn through, but at times verging on rain showers, and  I did find many of Main Street's usual suspects doing their usual things, as well as a few pleasant surprises; a splendid morning adventure that even included a little boat ride. My only regret is: so many people, so many nooks and crannies of Edgartown; so little time.

And the thing I love about this bliggety-blog thing is, unlike my old Edgartown Column in the MV Times, which was mostly words, Edgartown News is mostly pictures with not too many words. I am of the firm opinion that the world would be a much better place with fewer words and more pictures.

Why not start with a few of Edgartown's icons; landmarks I see every day and take for granted. Am I able to see them with new eyes today? 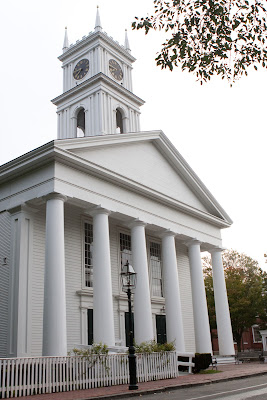 The Beautiful Old Church of Whaling Days, now called The Old Whaling Church. This building was once filled with Methodists (including my grandmother as well as many relatives), but several years ago the Methodists, so small in number that they could not afford to maintain the building, sold it to the Martha's Vineyard Preservation Society. The MVPS keeps the building maintained (beautifully), and rents it out for weddings, concerts, and other events. The Methodists still worship here, in a small chapel downstairs (I think - except maybe now they have been regionalized and relegated to Oak Bluffs).

The clock tower is owned by the town, and Tom Bassett is the keeper of the clock, as was his father, Gordon, for many years. Some people are bothered by the sound of the clock, especially near-neighbors during the wee hours. I live a block away and I never hear it in the middle of the night (in the same way that I don't hear the Green Line right outside my city window).

There's a soup supper downstairs on Monday nights during the winter, a great gathering place for year-round islanders; as social - if not more so -  as it is gustatory. 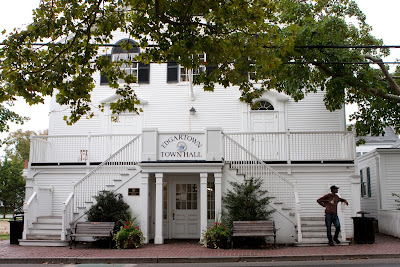 Town hall. Once home to every office in town, including the police station; also my mother's welfare office, where I spent many an after-school hour typing on her old black Royal, in the days when the ten cents she gave me to spend at Lenny's drug store or at the paper store went a long way. Egads, I sound a hundred years old. Egads, who even says egads anymore? 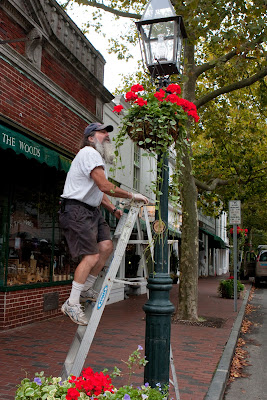 Tom Benedict has begun prepping the lampposts for a fresh coat of paint. Two years ago, Tom painted the cannons and cannonballs at Memorial Park. Another project of Tom's was gilding the Roman numerals on the town clock a few years back. 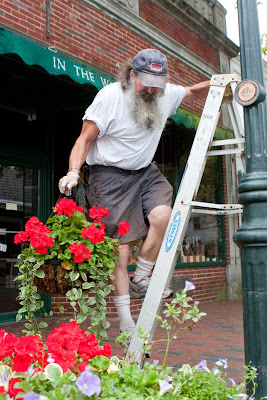 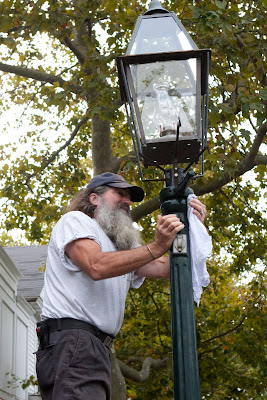 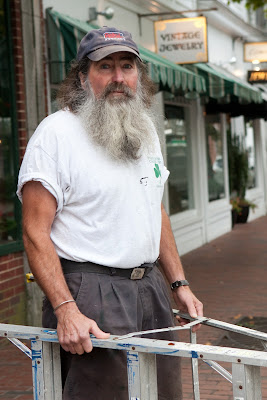 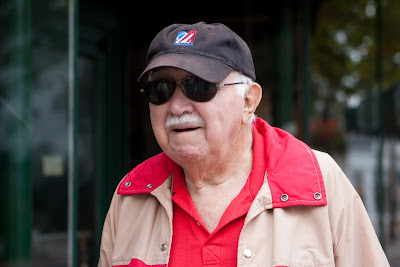 My cousin-in-law, Harold, out for his morning walk. 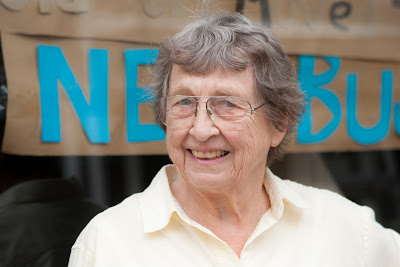 My friend Heidi Shultz, down from West Tisbury. It took her about six minutes to say, "I never come to Edgartown." Heidi was slow. I knew she'd get to it but I expected it much earlier in the conversation. 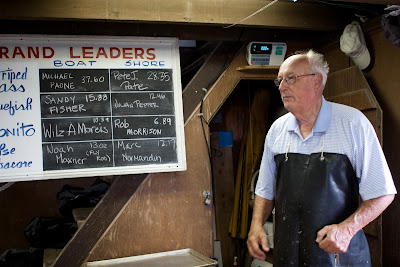 A quiet morning down at Derby Headquarters, with the board reportedly not changing much in the past few days except for the recent addition of Rob Morrison's bonito. 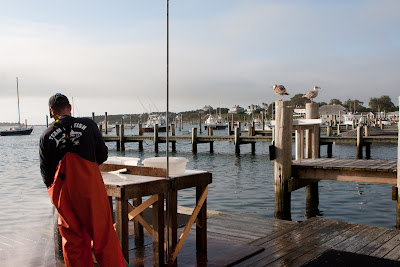 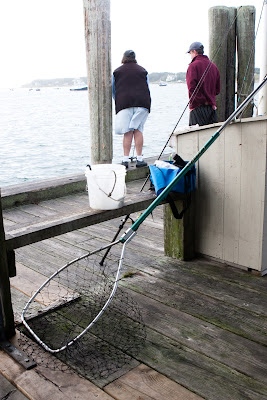 All is in order at Memorial Wharf. 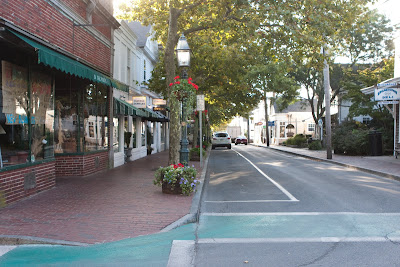 The autumnal equinox - the moment when the Earth's axis is perpendicular to the sun, one of the two days per year when day and night are roughly equal - occurs tonight at 11:09 (first grand-babe's day of birth, one year ago tomorrow, coincided auspiciously with this equinox, as will many of his birthdays in years to come). This morning, knowing that today was the official last day of summer, I headed out to take in and grab onto every last bit of it I could find.

It was a glorious morning, and a perfect day for roaming and lolly-gagging - my absolutely favorite kind of day -  with clean, empty streets (happily, I beat the tour bus crowds), with townies galore, including Paul Thurlow, Eddie Smith, Skip Tomassian, Carol Koser, as well as a few others you will see below. It was such a great day to be outside - gorgeous light with an absolutely intoxicating breeze - that I had a hard time dragging myself back indoors. 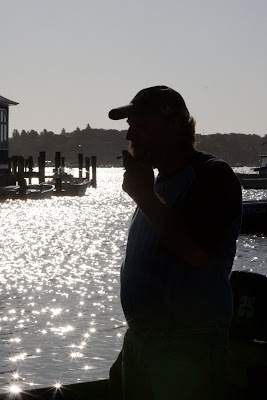 
This morning I broke away from my desk, ostensibly to mail a couple of letters and buy a loaf of bread, and while I was at it, walked into town and down around the finger-piers before heading uptown to the post office, getting my exercise and people fix in for the day; one of them, anyway. I made a conscious choice not to carry my big camera - this was not a photography excursion, too much on my plate today - but luckily, I always have my little G9 in my backpack because when I came around the corner of Derby Headquarters, I found this photo-worthy scene (that's the thing about photography - you just never know):

Actually, I prefer CLEM-a-tis, and I've also seen cle-may-tis listed as an acceptable pronunciation. Whatever your preference, it is currently clematis season around here, and having just come in from trimming part of my miles-long hedge (seems that way, anyway), a good part of this chore having included a wrestling match with this pretty-yet-pervasive vine, I do have mixed feelings about the stuff.

But rather than blather on, I will offer a short verse written by my dear mother, as good a summary of clematis as any (and I see by the accent that she penned in above the first syllable in her manuscript - typed on onion skin with her black Royal typewriter - that I must have learned my pronunciation from her).This is one of the shortest of the couple of dozen or so poems my mother wrote, and will surely not be the last we see of her poetry in these pages. The photos were taken today, for the occasion - in between climbing up and down staging and yanking my arm out trying to keep the trimmer going, thanks to a bad mix of gas, methinks. 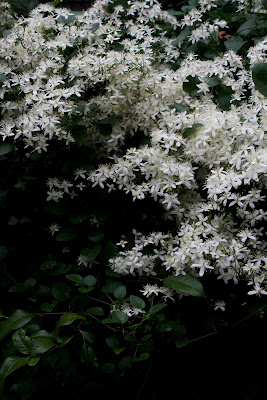 Clematis foams over old fences,
Creeps over crumbling stone walls,
Drifts over everything in its path.
Alison Boylston Piazza 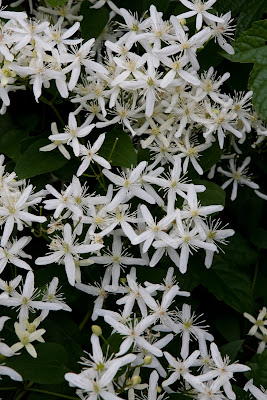 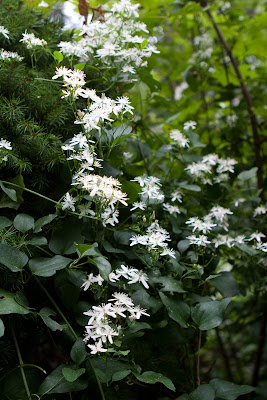 Sunday was a classic Vineyard September day, a one-hundred-dollar day if there ever was one - crystal clear, not too hot, not too cold, with a brisk, refreshing wind; remnants of Earl, the hurricane that wasn't.

I had a hankering to see what was going on out at South Beach, wave-wise, so I took a drive out the right fork.

The first thing I noticed when I got to the beach was a large swarm, or flock, of something in the air over the dunes. At first I thought it was a swarm of dragonflies - this being dragonfly season and all - but as I walked closer to the action I realized it was the largest flock of swallows I had ever seen; there were literally hundreds and hundreds of swallows, soaring together en masse and in perfect synchronicity: up to the sky - soaring to the left, swooping to the right; now down, now up. This collective mass of birds looked like a fast-moving black cloud, swooping down very low to the dunes, not quite landing, but rather, hovering over the grass, but only briefly before suddenly soaring sky-ward again. They seemed unfazed by my presence and I was able to get so close that I could practically feel the flutter of their wings. I watched them in amazement as they repeated these movements several times before they flew on down Atlantic Avenue. I have never seen such a large flock of swallows before and I have no idea what they were doing. I thought perhaps they were in the middle of a feeding frenzy, but I didn't see any bugs. Besides, it was way too windy at South Beach yesterday for mosquitoes to be flying around. The other thing I wondered as I watched this fascinating sky dance was - how do they know how to fly together with such precise synchronicity? Is there a leader? Or, maybe they are so intricately tuned in to each other and to the group that each is able to match the movement of the bird next to itself, instantaneously.

Whatever the answers, I count this dance of the swallows as a treasure of a treasured day, thoroughly enjoyed and appreciated by this spectator.

Posted by Sara Piazza at 3:10 PM No comments: