Olio is a word that turns up every so often in crossword puzzles but is seldom used in conversation (along with a-sea, ague, and orts. Seriously, when was the last time you heard any of these words used in a sentence? "Where has George gone?" "Oh, he's a-sea in his wee boat." Or, "Poor Susie, she's been stricken with ague." Or, how about, "Would someone please sweep up the orts from under the dinner table?")

This post, consisting of photographic gleanings from a quick walk into town this evening, is an olio; a hodgepodge.

Five minutes later I came upon two more love birds, a couple from New York who asked me to take their picture as I walked by. They are engaged to be married.

I am often asked to take pictures of strangers - young couples fumbling with their cell phone cameras, finally yielding to the inevitable, and having no idea of course that their impromptu photographer makes part of her living photographing people.

Nancy Arruda is Edgartown's keeper of the flags, raising and lowering all seven of the town's flags every day. Let's see if I can remember them all: 1. the monument at Pease's Point Way; 2. courthouse; 3. town hall; 4. Memorial Wharf; 5. Whale Park (pictured here); 6 Cannonball Park; 7. American Legion hall.

Uh-oh, looks like trouble, and that starts with T and that rhymes with P and that stands for Geno and Adnan!

The boys, cooking up dastardly schemes, no doubt.

Nicholas Carpenter, in on the ground floor of ice cream season 2012 at Scoops.

March to the Sea

While swinging from my living room ceiling with a paint brush yesterday, I caught a glimpse through the window of Officer Neal Condlin, lurking on the corner of Pease's Point Way in front of the monument, glancing expectantly up Main Street. I thought this was a bit unusual for a Friday afternoon in May - it crossed my mind that there may have been an accident farther up the street - so I popped out the front door to take a peak.

What I saw when I looked westward were flashing blue lights which preceded a small army of school children and their accompanying adults and EPD officials parading down Main Street, on their way to Memorial Wharf in the annual Memorial Day March to the Sea.

Luckily for me, they were far enough up the street to allow me to quickly run upstairs and grab my camera. Just when I was thinking, "I need something to blog about," too.

Seeing the children with their flowers and flags quite made my day. I especially loved seeing Rich Colter and Cathy Convery Lewis among the throng, they having been among the schoolmates I marched with years ago.

I was also very glad to have been able to take a few photos before the skies let loose with a sudden deluge of rain.

Have a great weekend, everybody - and let us never forget those who have given their lives to keep us safe and free.

File this one under "If you don't like my driving, stay off the sidewalk."

Oops, on my way back home from a pleasant and peaceful walk on Sunday evening, I encountered this scene, only two blocks from my home. Fortunately, there were no injuries, and I can't help adding: glad I didn't happen to be walking in that exact spot at the time; multiply this thought by 1,000,000-squared for the fact that I didn't happen to be walking there with a baby carriage. Jeesh!

A reminder that this is the time of year to have eyes and ears wide open, as we are entering the Insane Asylum season. Better yet, how about not leaving the property until September?

Edgartown's ambulances: on the ready - but thankfully, not needed.

Posted by Sara Piazza at 8:00 PM No comments:

Speaking of Squid, which seems to be the subject for this week, I received an e-mail from Nancy Lane Long, in which she shared this childhood squid memory:

My mom, Vangie, had bought me a new fisherman sweater at Village Fair for my birthday. I think I was about 13. It was literally one of my few "boughten" sweaters, as she, like most moms, knit for pleasure and for thrift back in those days. I was thrilled. Wore it down to the docks one evening while it was still brand new. Ralph Case was fishing for squid. The squid squirt me down the front of my brand new sweater. Squid ink is indelible. Pride goeth before a fall.

(Nancy Lane Long grew up on the corner of Pease's Point Way and Davis Lane, was a couple of years behind me in school, and stumbled onto Edgartown News via a Disqus comment page. Nancy lives off-island now, but her heart remains in Edgartown. Thanks for checking in, Nancy.)

I know that calimari is considered a delicacy and is enjoyed by many (my late step-father-in-law, Sam Riccio, was a connoisseur and creator of calimari), but I will confess that after spending many a childhood summer day fishing down at the town wharf, cutting up frozen squid (on the seats, alas - what did we know, we were kids), watching it thaw, dry in the sun, and ultimately become a rotting, stinking mess, you won't find me eating it anytime soon, and the day, many years ago, when Paul was squiring me around in his classic maroon Ford Fairlane and I happened to sit on an old rotten piece of squid that had fallen off of his fishing pole onto to the passenger seat sealed the deal. This piece of errant bait was only approximately 1/2" square, but was the rotten-ist thing you ever smelled, and I think I even wore it on my backside for a short while until we figured out where the smell was coming from. Romantic, right?

But it looks like fun, catching it, and I guess I'll have to eventually take the grand kids down to the docks to give squidding a whirl, maybe even with their grandfather's old squid jigs.
Posted by Sara Piazza at 12:07 PM No comments:

Posted by Sara Piazza at 9:55 PM No comments:

Squid fever continues to infect our town - in a most delightful way - bringing people out into the late afternoon streets, with and without fishing poles. Here are a few of the faces and scenes I came upon on my walk down to the docks this evening. I would caption these photos but Blogger's new UI has thrown me for a loop. I'll figure it out soon, I'm sure.

Read more »
Posted by Sara Piazza at 9:14 PM No comments:

Nothing like an influx of squid to get folks out of their houses and bring a community together (all taken with smartphone via Instagram - I LOVE Instagram). 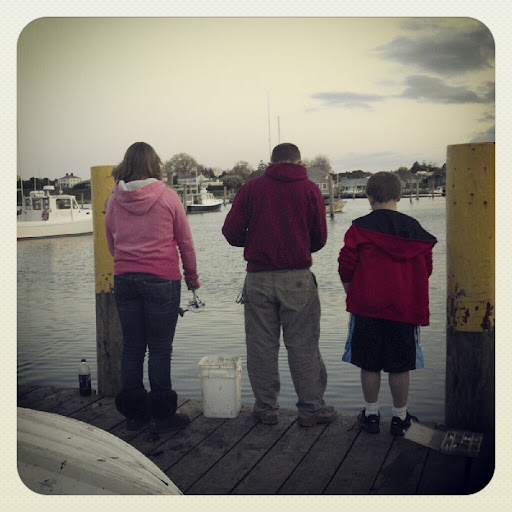 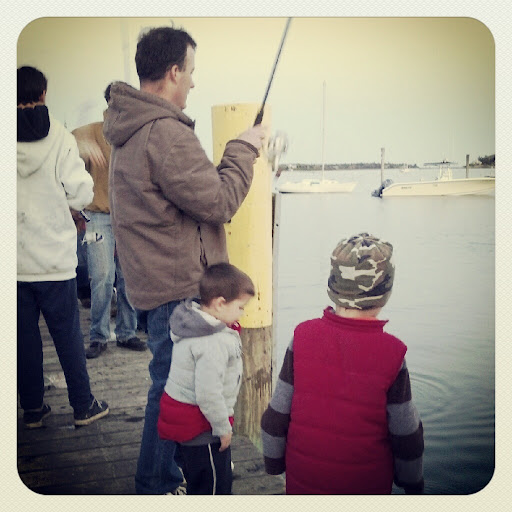 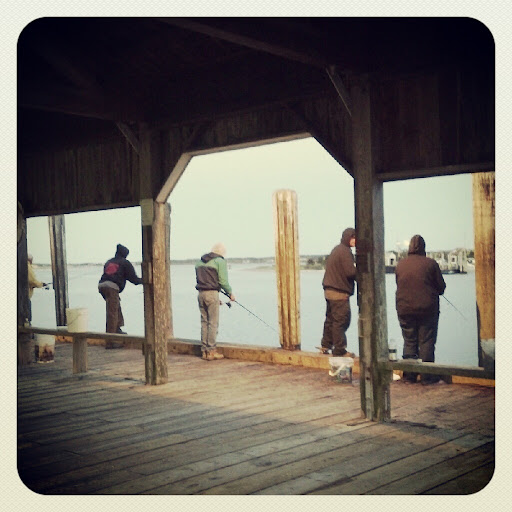 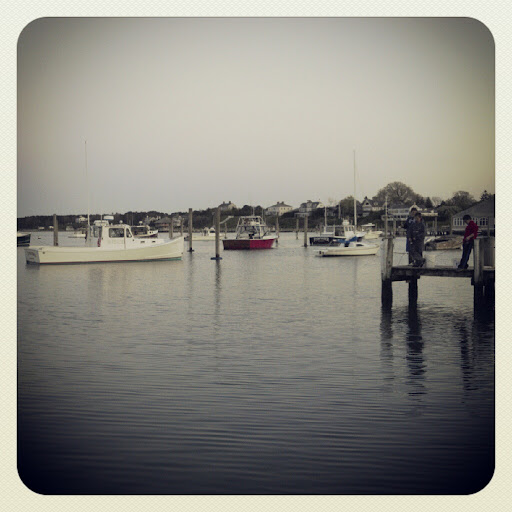